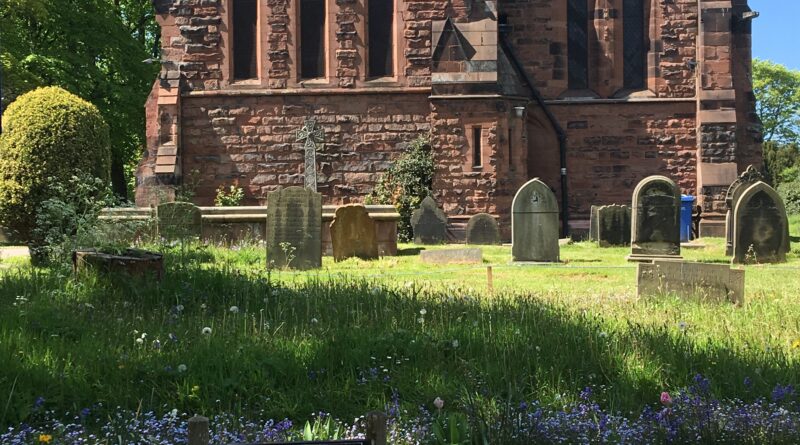 All Saint’s Church was built in 1843, to provide a church for the people of Thelwall. These pages detail the history of All Saints’ from its beginning up to the current time.

Background
It is thought that the Ancient Chapel was built by Richard Brooke, but a legal suit in 1663 between the Chapel Wardens of Thelwall and the Church Wardens of Daresbury suggests that it could be older. The legal suit arose out of an unwillingness on the part of Thelwall to pay towards the repair of Runcom Church and the Daresbury Chapel; Thelwall being in the chapelry of Daresbury and the Parish of Runcorn. People giving evidence suggested that it was a very ancient Chapel then, older than Daresbury. One of the witnesses giving evidence at the enquiry, Johannes Okell de Preston, remembered that a long form had been set up in Daresbury Chapel for the use of the inhabitants of Thelwall.

“SS Johannes Lawrenson de Thelwall, a linen weaver, stated that he could remember three different ministers being hired to serve the Chapel and that it had been in a ruinous state for some time until it was repaired and made fit for worship again by Robert Pickering.”

Ancient Chapel repaired
In 1731 an effort was made to obtain help for the Chapel from Queen Anne’s Bounty. A lot was drawn in its favour, which was set aside and not used until 1782, when commissioners were appointed by the Bishop of Chester to refit and repair it.

The Chapel, having been restored by the aid of voluntary contributions, private benefactions and assistance from Queen Anne’s Bounty, was re-opened for Divine Service in October 1782. At this time it was made a Parochial Chapel. The first incumbent then appointed was Rev. Thomas Blackburne B.A. on the presentation of Henry Pickering Esq. He held it until his death on the 27th April 1823, when he was succeeded to the living by Joseph Brindle, who was presented to the living by Thomas Abree Pickering Esq.

A thriving Church
By 1843, the Ancient Chapel was too small for Thelwall. It only held eighty people and at this time the population had grown to over three hundred. It was, therefore, decided to build a new church on the site of the Chapel, dedicated like the Chapel to All Saints. William Nicholson, Lord of the Manor, gave the land and several of the gentry gave contributions to cover the cost of the building.

A new building dawns
On Thursday 11th May 1843 the foundation stone was laid for the building of the Church. The stone was laid by William Nicholson Esq. using a silver trowel for the job. A glass bottle containing coins of the realm was placed in an alcove in the stone and a brass plate was laid over it with the names of the contributors on it and the inscription “IHS”. The first stone of this building intended to be set apart for the worship of Almighty God, according to the ritual of the Church of England, in place of the Ancient Chapel that from lapse of years hath become too small for the population of the township and dedicated like its predecessor to All Saints, was laid the 11th day of May in the year of our Lord 1843, by William Nicholson Esq. Patron.
Mr. Nicholson hoped that the sacred building.

“would be the means of diffusing the blessing of pure religion to generations yet unborn.”

By November of the same year, the church was finished and on Monday 13th November the Church was consecrated by the Bishop of Chester. In his sermon the Bishop reminded the congregation of the 20th verse of the fifth chapter of the 2nd Epistle to the Corinthians which reads.

“Now then we are ambassadors for Christ, as though God did beseech you by us: we pray you in Christ’s stead, be ye reconciled to God.”

He pointed out the character of an ambassador, the message they had to deliver and to whom it was to be delivered. The Bishop made some practical and heart stirring remarks about the responsibilities of pastor and flock.

The Church in 1843 consisted of the nave. It was described as ‘built of stone cased with brick in the Early English style, with narrow lancet windows, high pitched roof and lightpointed belfry.’

The altar, which was placed on an ascent of three steps, was a focal point for the visitor’s eye. It was covered by a beautiful crimson altar cloth embroidered in gold. The font was square and on several sides were represented a floriated Greek cross, the sacred monogram, the crown of thorns, reed, spear and the hammer, pincers and nails. The grey and white marble monument to the Pickering family had been taken down from the Ancient Chapel and placed on the wall in the new Church. The remains of the Pickering family had previously rested inside the Chapel, now they were outside in the graveyard.

Church enlargements
In 1856 enlargements to the Church began. The Chancel was built on at the expense of James Nicholson. When it was built it was assigned to James as a burial place for him and his family. In his will, he requested that his body

“should lie in the Chancel of All Saints beside that of his wife.”

At this time the nave was extended by one bay.
In 1890 Henry Stanton commissioned a new North Aisle, new Baptistry with a new font and a new vestry. The church was reseated throughout. So, what started off as a fairly small village Church had become a much larger, much more imposing building.

In 1872 James Nicholson gave a mortuary under the Churchyard. The original tap for washing bodies and it is still there today.

This week the service is about the work of Christian Aid in Zimbabwe. Please donate HERE. Janet Zirugo and her

The Easter Egg Hunt is back!!

All Saints returns to Normality